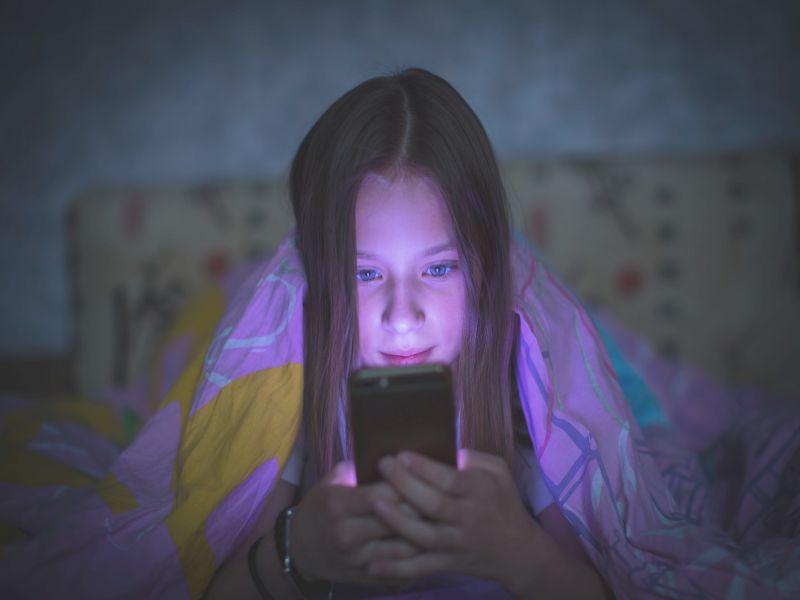 Research shows that exposure to too much light in the evening -- particularly blue light from smartphones, tablets and computers -- can affect the brain's clock and production of the sleep hormone melatonin, resulting in reduced sleep time and quality.

It's believed to be a bigger problem among kids and teens than among adults. This study by researchers in the Netherlands zeroed in on how screen time affects teens' sleep.

On average, teens who spent more than four hours a day looking at a screen took 30 minutes longer to fall asleep, woke up 30 minutes later and had more signs of sleep loss, including moodiness, fatigue and poor concentration, than teens with less than an hour a day of screen time, the study found.

Researchers then assessed how blocking blue light with glasses and forbidding screen time during the evening affected sleep patterns of 25 frequent screen users.

After just one week, the teens had fewer signs of sleep loss -- and they were falling asleep and waking up 20 minutes sooner.

"Here we show very simply that these sleep complaints can be easily reversed by minimizing evening screen use or exposure to blue light," study author Dirk Jan Stenvers said in a society news release. "Based on our data, it is likely that adolescent sleep complaints and delayed sleep onset are at least partly mediated by blue light from screens."

He's a clinical fellow in the Department of Endocrinology and Metabolism at Amsterdam UMC, a medical and research center.

The next step is to determine whether reducing screen time improves sleep over the long term, and whether adults get the same benefits.

"Sleep disturbances start with minor symptoms of tiredness and poor concentration but in the long-term we know that sleep loss is associated with increased risk of obesity, diabetes and heart disease," Stenvers said. "If we can introduce simple measures now to tackle this issue, we can avoid greater health problems in years to come."

The study was presented May 19 at the European Society of Endocrinology's annual meeting in Lyon, France. Research presented at meetings is typically considered preliminary until published in a peer-reviewed journal.

The National Sleep Foundation has more on teens and sleep.